Last night (10 Jan 2012) Dr. Bruce Bugbee was awarded the Governor’s Science and Technology Medal for 2011 at an awards banquet held in the Discovery Gateway Children’s Museum. When the medal was presented to Bruce by Governor Herbert, a few accomplishments from Bruce’s work at Utah State University and at Apogee Instruments were briefly mentioned. Before the banquet several of Bruce’s guests were conversing and the question came up of regarding the nomination process and what Bruce had done to merit such consideration. Bruce replied that he had done “nothing in the past year” that was deserving of the award, but that rather it was something of an acknowledgment of lifetime achievement. My disagreement with this statement is that in the seven years I have personally known Bruce he has not slowed down one bit and has many years of achievement ahead of him.

While the awards ceremony was necessarily brief, I would like to take this opportunity to share a personal view of Bruce Bugbee, garnered from my work experience at Apogee Instruments. Bruce is a brilliant scientist, whose curriculum vitae can be seen at the crop physiology web site, http://www.usu.edu/cpl/general_info_bruce_cv.htm. Please indulge me while I share a personal insight of Bruce Bugbee.

Two of Bruce’s guests to the awards ceremony were long time friends Kookie Tanner and Mary Heers. We were discussing Bruce and how much he accomplishes at both USU and Apogee. The comment was made “I don’t know how he does it,” to which I replied that I had some idea. Bruce is the hardest working individual I know. I receive emails from him at 10 p.m. and they start up again at 6 or 7 a.m. He barely stops for sleep and rarely stops to eat. In December of 2011 Bruce and I were in San Francisco for the American Geophysics Union annual meeting. We were going out to dinner at a Thai restaurant with several colleagues from Campbell Scientific, including Larry Jacobsen and Sasha Ivans. While we were waiting for our table to be ready the conversation turned to how inefficient eating is and if there wasn’t a better way to consume calories. Bruce was interested in the question of “How many calories are there in gasoline?” In other words, is there a way I can spend less time eating so I can devote more time to what I love?

Another annual meeting that Bruce attends is for the Agronomy Society of America. Bruce likes to share the story that many years ago the show was held in Las Vegas but afterwards the Society was invited to not return to Las Vegas for their annual meeting. Apparently there was a noticeable dip in the earnings at the poker tables and other offerings when the crop and soil scientists were in town. In reference to that Las Vegas meeting Dr. Gaylon Campbell, founder of Decagon Devices and professor at Washington State University, said they “showed up with a twenty dollar bill and a copy of the ten commandments and didn’t break either one.” Bruce is fiscally responsible and yet at the same time, very generous to his employees at Apogee. When he was designing our current building, he wanted to have a building where employees would be proud to work. Bruce and Apogee have also started a policy of donating a percentage of the annual profit to non-profit organizations in our area to help the community. 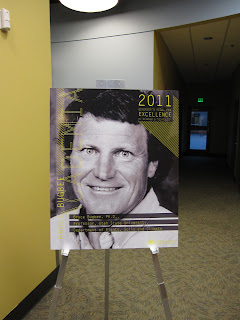 Bruce’s generosity is based on his deep, caring concern for other people (and animals). If you call his home phone and get the answering machine, you will be greeted by Bruce, welcoming you to the home of “Bruce, Anna and Coconut.” Anna is Bruce’s daughter, whose school science fair posters have adorned the halls of the research greenhouse at the USU campus. Coconut is their cat, who has his own graph in Bruce’s home, charting his weight over several years. When the father of an employee at Apogee passed away, Bruce wanted to do something other than send the expected flowers. Instead Apogee planted a Magnolia tree with a plaque in honor of her father.

The keynote speaker at the awards ceremony talked about the convergence of science and math while doing a sculpture of Leonardo da Vinci. Leonardo was described as a Renaissance man, someone with broad intellectual interests spanning both science and math. In discussing scientists, he said that the highest praise you can give a scientist is to describe his work as elegant, that it is precise, simple and yet profound. Years ago at an Apogee Christmas Party, our graphic designer described Bruce as a Renaissance man. Bruce is a brilliant scientist and more. It is a privilege to work with Bruce, whose life and work are truly elegant.