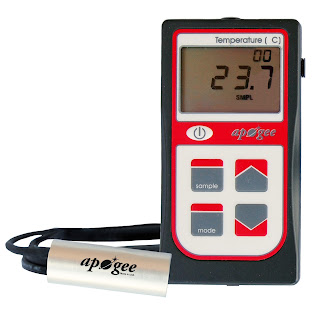 The IRR meter has a tenth degree resolution with ±0.3 C accuracy. Each meter is calibrated individually in order to achieve this accuracy so you can be confident in the reading.

This meter has the same basic modes for saving data as our other meters including:

The IRR Meter can be used for spot measurements of canopy or road temperatures. It can also be used to verify the accuracy of IRR Sensors that are wired to a datalogger. This is especially convenient when wondering if a sensor needs to be recalibrated.

The SI-131 has a half angle of 14 degrees compared to 18 and 22 degrees of our current infrared radiometers. This will allow for measurements of smaller areas with less chance of seeing anything unwanted. The sensor has an accuracy of ±0.3 C.

These are some products we have been perfecting for a long time so that you can ‘Make Better Measurements.’ 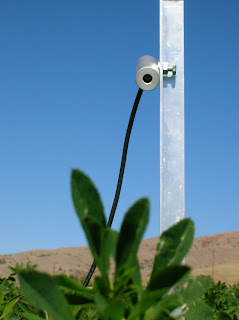 Temperature of an object is determined by three modes of heat transfer: conduction, convection, and radiation. While conduction and convection are generally easier to understand, radiation is often the most important mode of heat transfer. Understanding the underlying principles of radiation heat transfer helps to accurately measure surface temperatures at a distance with Apogee’s Infrared Radiometers (IRR). In this post I outline the essential principles in order to help you make better measurements.

All objects above 0 K (-273.15°C) emit radiation at the surface, due to the internal energy contained within the object. Radiation is continuously being emitted from surfaces and being absorbed, transmitted, and reflected. Some surfaces emit or absorb, for instance, better than others. This is mainly due to a surface condition called emissivity, which is determined by color, finish, and intrinsic material properties. Emissivity is a ratio of how well a surface performs as an emitter of infrared radiation in comparison to what is commonly called a blackbody, or ideal radiator. A blackbody is described as follows:


Generally speaking, a blackbody is the perfect absorber and emitter. It is the standard we compare other radiating surfaces against. No other surface absorbs more energy or emits it than a blackbody. In addition, no radiation emitted from a blackbody is reflected from other sources.

According to the Stefan-Boltzmann Law, the emissive power of a blackbody is Eb=σT4, where

and the temperature is measured in Kelvin. Accordingly, for a non-blackbody, the emissive power is Eb=εσT4, where ε is the emissivity of the surface being considered (0<ε<1), and ε = 1 for a blackbody. The chart below shows emissivities for common materials. Additional values can be found at its source: http://www.engineeringtoolbox.com/emissivity-coefficients-d_447.html. 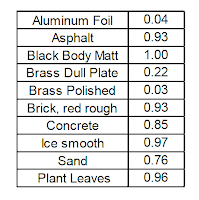 Although emissivities are not constant over all wavelengths, it is generally accepted practice to assume them constant due to the small amount of variation over the different wavelengths for most materials.

For plant scientists, it might also be interesting to consider the emissivities documented for various plant leaves and diverse vegetation over different wavelengths (http://g.icess.ucsb.edu/modis/EMIS/html/leaf.html).

If emissivity isn’t taken into account, the surface temperature of an object may appear to be emitting more radiation, due to the addition of reflective radiation for instance, than it really is and thereby giving us an incorrect perception for the emissive power or temperature of that surface. This can be especially true for an IRR sensor that has been calibrated to a nearly standard blackbody surface. The calibration procedure for Apogee’s IRR sensors ( http://www.apogeeinstruments.com/content/SI-calibrationposter.pdf ) shows just that.

The question then is: how can I adapt for such a situation?

Appropriate correction for target emissivity is required for accurate surface temperature measurements. However, the simple correction that is commonly made, dividing the measured temperature by the target emissivity, is incorrect because it does not account for reflected radiation. The radiation detected by an infrared radiometer includes two components: 1) the radiation directly emitted by the target surface, and 2) reflected radiation from the background. The second component is often neglected. The ratio of the two components in the radiation detected by the radiometer is weighted according to the emissivity (ε) of the target surface:

Which after substitution of the Stefan-Boltzmann Law and rearranging, we get:

In order to apply the above equation however, we must measure or estimate with reasonable accuracy the brightness temperature of the background (Tbackground). For a more in-depth explanation of how to do so, please see: http://www.apogeeinstruments.com/content/SI-emissivitycorrection.pdf. 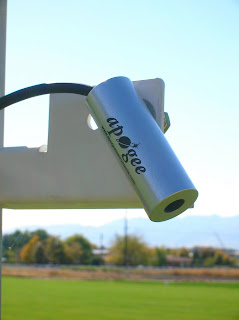 In any case, as the emissivity of what we are trying to measure moves further away from a blackbody, the more that emissivity error is introduced due to reflected radiation from surroundings. For example, the target temperature of a 25°C plant leaf on a sunny day could provide an error of -1.5°C, without emissivity correction [2]. That’s an error that most scientists can’t tolerate.

In almost all situations, having a precise IRR sensor, such as Apogee’s ±0.2°C accurate IRR sensors won’t be enough. Emissivity correction is required to minimize error in your data. Whether you are using it in on a plant canopy or monitoring icy road conditions, emissivity correction will help you make better measurements.

[2] “A Review of the Physics for Emissivity Correction of Infrared Temperature Measurements” URL: http://www.apogeeinstruments.com/content/SI-emissivitycorrection.pdf. 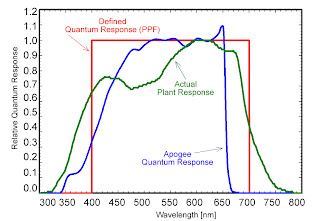 Since 1972 when a scientist named Keith McCree demonstrated that counting photons in the photosynthetically active range (400 to 700 nm) would better predict photosynthesis than the measurement of foot-candles, the quantum sensor has been used to measure radiation for plants. This is called the photosynthetic photon flux (PPF). The following graph shows McCree’s findings for the actual plant response (green) along with the defined quantum response (red) and Apogee’s quantum sensor response (blue). Notice that the defined quantum response appears as a perfectly flat spectral response, meaning it weights all wavelengths of light exactly the same between 400 and 700 nm.

Apogee offers quantum sensors that are calibrated for either sunlight or electric light. The reason for this is due to the significant differences in spectral output among light sources. The following graphs illustrate those differences. 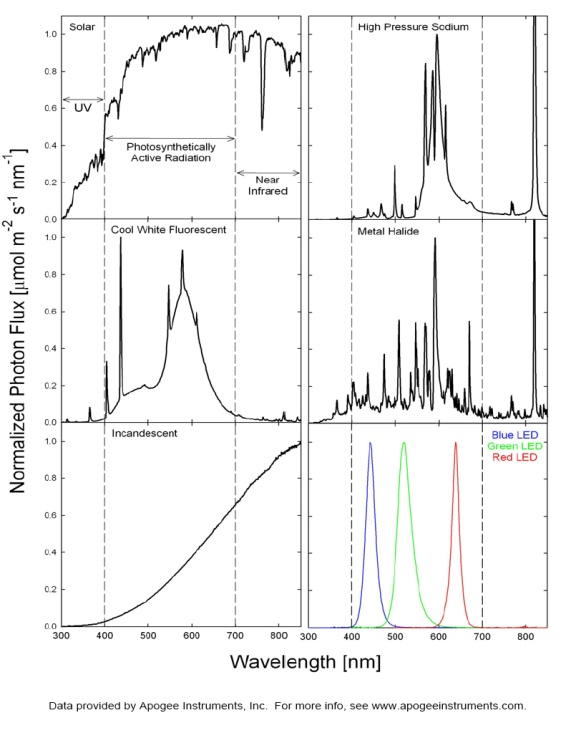