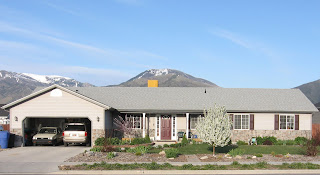 Ten years ago I began building my own home in Nibley, Utah. When it came time to pick the color for the asphalt shingles I talked my wife into a light gray color, compromising aesthetics in lieu of performance. Although I didn’t have any data to back it up, I knew that a lighter roof would heat up less from solar radiation, reducing the need to cool the house in the summer. I rationalized that in Cache Valley, the roof is covered with snow most of the winter and so the benefit of a dark roof helping to heat the house would be minimized in that regard. I never measured the temperature of my roof, but I knew the light color made a difference because our house stayed cool while running our swamp cooler less often than our neighbors. Now that I am at Apogee, my understanding of albedo far surpasses what I knew then, and I could measure roof temperature with an infrared sensor to confirm the benefit of a light-colored roof.

My interest in the subject of high-albedo roofs was piqued when one of our customers forwarded me a copy of a paper (Gaffin et al., 2012 – see full citation below) they recently published. To partially mitigate the urban heat island effect, roofs with a high albedo membrane, such as EPDM (ethylene—propylene—diene monomer) and TPO (thermoplastic polyolefin), are used in new construction. Much of the study compared the difference in surface temperatures between black and white surfaces composed of the various roofing materials previously mentioned. The customer used an Apogee infrared radiometer to measure rooftop membrane temperature in New York City. For the TPO test case, a black geotextile cloth sample was used to compare against the white membrane. Peak temperature differences reached as high as 23.7 oC with average daily temperature differences equaling 6.6 oC. All surfaces had comparable initial albedos, with the white acrylic paint experiencing a considerable decline in albedo over time. Location is another significant factor. The acrylic paint site was possibly affected by a large traffic artery adjacent to the test site building, as well as an above ground subway line. Another site was affected by leaf litter and vegetation debris from surrounding trees.

When our current building for Apogee Instruments was constructed, a 60 mil TPO membrane was used. Historically, urban roofs have been asphaltic to allow for varying roof geometries, as well as the need for numerous roof structures such as heating and cooling units, ducts and vents. These asphaltic membrane roofs are typically topped with sand, gravel or rock and have low albedos. Gaffin et al. (2012) also looked at a white elastomeric acrylic paint that has been developed to apply to asphaltic membranes and is being used by New York City’s government for an albedo enhancement program. The white acrylic paint does significantly increase the albedo of the existing roof materials but the decrease over time indicates that all new construction should use EPDM or TPO membranes. Additionally, low emissivity may be a benefit in colder climates and this parameter should be considered in future performance standards.

I found the article very interesting and was surprised at the peak temperature differences demonstrated with different colors of the same material. It was validation for me of the choice to use a light gray shingle color when building my house. I was also pleased to see that when Apogee built our building, the materials selected help minimize heat gain, and in turn make the building more environmentally friendly. I appreciate working for a company that has a commitment to environmental responsibility and that builds sensors to promote research into renewable energy and green building practices.