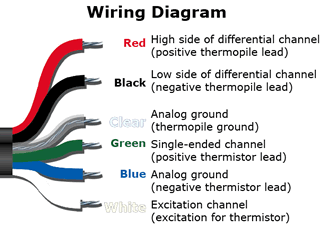 A differential voltage is “floating”, meaning that it has no reference to ground. The measurement is taken as the voltage difference between the two wires. The main benefit of a differential measurement is noise rejection, because the noise is added to both wires and can then be filtered out by the common mode rejection of the data acquisition system. Differential measurements should be used if the sensor is in a noisy environment or for sensors with output voltages susceptible to noise interference. For example, we recommend that the thermopile output from Apogee SI-100 series infrared radiometers should always be measured differentially because the small voltages are susceptible to noise.

A single-ended measurement is taken as the voltage difference between a wire and ground. The noise is only on the positive wire, and as a result, it is still measured along with the output voltage from the sensor. Some sensors, for example amplified versions of Apogee SP and SQ series sensors, only have a single output and must be wired into a single-ended channel. A sensor with a differential output can be wired for single-ended by wiring the low side to ground. This is usually done to reduce the number of channels needed to measure the sensors. It should be noted that some sensors (for example, the thermopile output from Apogee SI-100 series infrared radiometers) can output a negative voltage which means that the data acquisition system needs to be able to measure negative voltages.